Nový Hlavák – Expert Committee Selected Five Architectural Teams for the Next Stage of the Competitive Dialogue.

On the 13th and 14th of September, an expert committee session focusing on the approach methodologies of the registered teams took place. The committee session was a part of the Competitive Dialogue Procurement Procedure for the revitalisation of Vrchlického sady Park, new construction of the tramway line Muzeum – Bolzanova and the reconstruction of the New Terminal Hall of the Prague Main Railway Station. Out of the 26 entries, the committee selected five architectural teams which are advancing to the next phase of the competitive dialogue.

In June 2022, the competitive dialogue attracted 26 architectural studios from the Czech Republic and abroad, out of which 24 entered their approach methodologies and portfolios, which came under the scrutiny of the committee in September. During the two-day session 5 out of the 26 enrolled teams were selected for the next round of the tender procedure. The selected teams will introduce themselves to the public at an open session on October 7th from 7:00 PM on the campus of Prague’s CAMP. The introduction to the broad public will be held under the auspices of the representatives of the contracting parties and the expert committee.

The landscaping studio West 8 was founded in 1987 in Rotterdam, the Netherlands by Dutch landscaping architect Adriaan Geuz. Currently, the studio consists of an international team counting more than 70 architects across three branches in Rotterdam, Brussels, and Philadelphia. In cooperation with additional studios, they penned the linear park Madrid Rio, in the Spanish capital following the Manzanares river. The park came to light by veiling several busy roads. The studio transformed London’s Jubilee Gardens near the London Waterloo station. Among other things, they have been involved in the design of the Rotterdam Centraal station and the winning competition design for the new main station in Brno.

The Danish studio was founded in 1959 by Henning Larsen. Today it has more than 750 employees. In 2013 the studio was awarded the Mies van der Rohe Award for its Harpa concert hall in Iceland´s capital Reykjavík. Two years later they designed a new town hall for the Swedish city of Kiruna, which is in the process of being transported in its entirety three kilometres to the east due to an expanding mining operation. The studio was involved in the transformation of Remiseparken in Copenhagen, for which they won the Danish Landscape Prize in the past year.

Ondřej Chybík and Michal Krištof founded the architectural studio Chybik+Kristof Architects & Urban Designers in the year 2010. In three short years, they won the tender for the Czech pavilion for Milan´s EXPO exhibition. They are currently drawing up projects for a multifunctional hockey arena in Jihlava, a skyscraper in Ostrava, or the revitalisation of Mendl Square in Brno.

The president of Denver´s Civitas company is the world-renowned landscaping architect and urbanist Mark Johnson, whose long-term focus is the sustainable development of cities. Together with his team, they completed 500 projects in North America, Europe, Asia and the Middle East. In Brno, he cooperated on an urban study of a new district known as Jižní centrum.

The Czech architectural studio re:architekti was founded in 2011 and its partners are Michal Kuzemenský, David Pavlišta, Ondřej Synek, Jan Vlach, and Jiří Žid. Their focus lies on public buildings. Currently, they are working on a project for a new school for Uhříněves district, or revitalisation of the Velké kino (The Great cinema) in Zlín. They prepared a conceptual study of the revitalisation of the entire transport hub at Prague´s terminal metro station Černý Most.

Italian architectural studio baukuh studio associato was nominated in the year 2017 for the Mies van der Rohe Award for the “House of Memory” archives in Milan. The Italian studio Yellow Office di Francesca Benedetto focuses on landscape architecture and urban planning. Both studios were involved in the competition-winning design for the new library in Milan this year.

Miralles Tagliabue EMBT is an architectural studio founded by Enrico Miralles and Benedetto Tagliabue in 1994 in Barcelona. Currently they are globally active and have offices in Paris and Shanghai. They designed the Santa Caterina market in Barcelona, the public spaces of Hafencity of Germany´s Hamburg and metro stations in Paris and Neapoli.

OCA architects Prague is the Czech branch of the Spanish architectural studio OCA Arquitectos Barcelona. It consists of a group of young architects, urban planners and designers currently participating in many competitions throughout Europe. In Prague, they are the brain behind the design of the currently constructed extension of the Kongresový palác (Prague Congress Centre).

How do the contracting parties and expert committee reflect on the session?

Chairman of the expert committee Ing. arch. Jaroslav Wertig shared his thought about the submitted methodological approaches and their ratings: “It isn´t entirely common to assess in a single competition such a multidisciplinary assignment and look for teams which will create a functional city space, redefine an important but problematic park, implement new transportation solutions and find an overarching urbanist approach respecting context, continuity, and community. It is less common that a roster of star architects and young local studios are peers in a competition. It is entirely uncommon that a committee consisting of such a diverse spectrum of expertise matches up. That´s why I´m very grateful, that the committee was able to achieve consensus and select five different, but high-quality approaches.”

Ing. Ondřej Boháč, Director of the Prague Institute of Planning and Development, added: "It was great to see the diverse approaches of the competing teams to the assignment, which aims to transform the gateway to the city and build on the upcoming transformations of Wenceslas Square, Florenc, Masaryčka and Těšnov. Prague needs Nový Hlavák like salt."

Ing. Jan Šurovský, Ph. D., Member of the Board of Directors, and Technical Director of the Dopravní podnik hl. m. Prahy – Povrch closes: "The competitive dialogue is a guarantee for us that a high-quality design of the planned tramway line will be suitably integrated into Vrchlické Sady and at the same time will fulfil the required transport function. The submitted approach methodologies have shown us that the teams take the task as a challenge and strive to meet the expectations of all contracting authorities."

Detailed information about the competitive dialogue and its schedule can be found on the website www.novyhlavak.cz, where we will introduce the individual teams.

Meeting of the evaluation commitee

On Tuesday 13 and Wednesday 14 September, the evaluation committee will meet as a part of the competitive dialogue. The selected judges will evaluate the individual approach methodologies of the teams that have passed the qualification phase. Following the session, five architectural teams will emerge to continue the competitive dialogue. We will keep you informed about the results, and we will gradually unveil teams that made the cut.

Prague, July 20 2022 – The tender procedure with a competitive dialogue to revitalize Vrchlického sady park, new construction of the tramway line Muzeum - Bolzanova and reconstruction of the New Terminal Hall of Prague Main Railway Station attracted 26 architectonic teams from Czechia and from abroad.

On Friday 15 June 2022, the deadline for interested parties to apply for participation in the New Hlavák competitive dialogue expired. A total of 26 architectural studios from the Czech Republic and abroad took advantage of this opportunity. Exclusively Czech participation is represented by 9 competition teams, the rest of the competition teams are represented by foreign teams or mixed teams in the form of Czech - foreign consortia.

"The topic, which is the subject of the "New Hlavák" dialogue competition, is incredibly complex and requires the participation and experience of a multidisciplinary team. We expected that there would be interest in the competitive dialogue not only from domestic participants, but also from abroad. However, the total number of 26 applicants, from 13 countries, exceeded our expectations", explains the guarantor of the assignment part of the competitive dialogue doc. Ing. arch. Jakub Cigler. objasňuje garant části zadání k soutěžnímu dialogu doc. Ing. arch. Jakub Cigler.

The competitive dialogue will gradually move into its next phase. The teams that have registered and demonstrated their qualification to participate in the competitive dialogue will be invited to develop a methodology for approaching the various topics to be addressed in the territory. On the basis of this methodology, the evaluation committee will then select 5 architectural teams to continue the dialogue in September 2022.

"As an substitute member of the evaluation committee, I will also participate in the September meeting and I am already very curious about the final selection. I think that the evaluation committee will have very responsible but at the same time difficult decisions to make. There are a number of great teams of architects among the entries, and I am personally delighted especially with the interesting Czech representation. It will be all the more difficult to select only 5 teams", concludes Jakub Cigler. uzavírá Jakub Cigler.

Further up-to-date information can be found on the website novyhlavak.cz.

In June 2022 a Competitive Dialogue Procurement Procedure for the revitalisation of Vrchlického sady Park, new construction of the tramway line Muzeum – Bolzanova and reconstruction of the New Terminal Hall of the Prague Main Railway Station was announced. The competitive dialogue and its subsequent implementation are joint activities of the Capital City of Prague, Správa železnic, Prague Public Transit Company and Prague Institute of Planning and Development. You can join as well! Whether you live in the vicinity of the Prague Main Railway Station, your place of work is nearby, or you have a local association. During a guided walk on June 14 from 4 PM and 6 PM (choose one option) you will get more information about the project. During a workshop meeting on June 16 from 6 PM you can share your suggestions and demands on what you currently miss in the concerned area and what you would like to see as part of the redevelopment. On the website www.novyhlavak.cz you will find information about the revitalisation project and the individual activities you can participate in with us. In addition to meeting in person, you will also be able to express your opinion through a survey, which you will find on the website from 23 June.

How to get involved in the transformation?

On Tuesday 14 June and Thursday 16 June, two participation meetings were held, which were open to anyone concerned with the planned revitalisation. The opinions and insights of the citizens who live or have their businesses in the area are very important for the creation of the competition brief - the new development is intended, among other things, to significantly improve and make everyday life in this strained and specific area more pleasant. Therefore, we are interested in every detail that could have a positive impact on the living conditions. On Tuesday, 14 June, we took a guided walk with the participants through the entire area to be affected by the revitalisation. Experts from the contracting organisations presented the planned activities and answered questions from the participants. At the same time, they took careful notes on individual comments and ideas. On Thursday, 16 June, we met again for the workshop, this time in the Historical Building of the National Museum. Over a map of the area, we discussed the various steps and topics of the upcoming revitalization with the participants, and again gathered suggestions. We are pleased that the public clearly welcomes the revitalization plan and does not hesitate to get involved in the process. Thank you! We will keep you informed about further activities and when you will be able to get involved again. 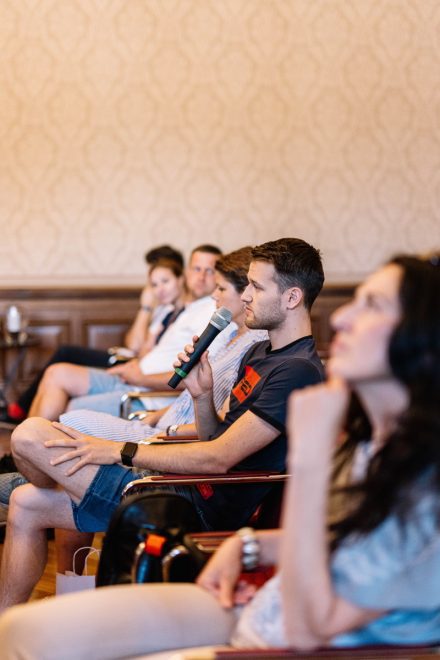 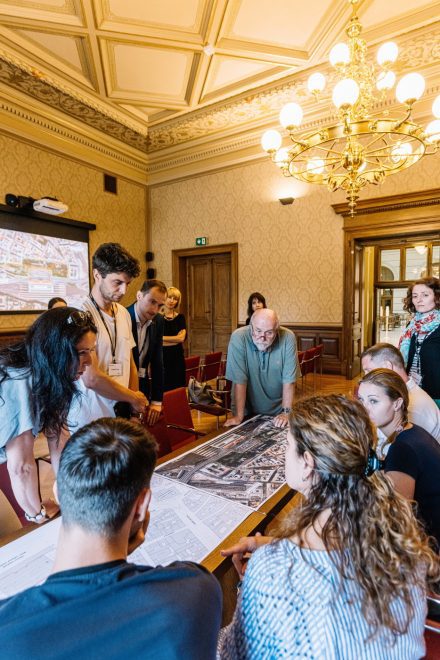 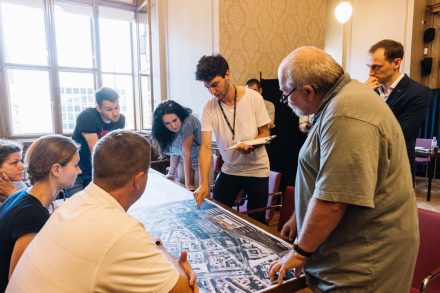 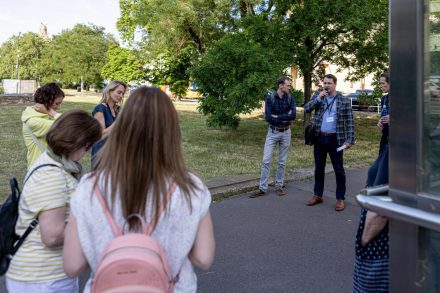 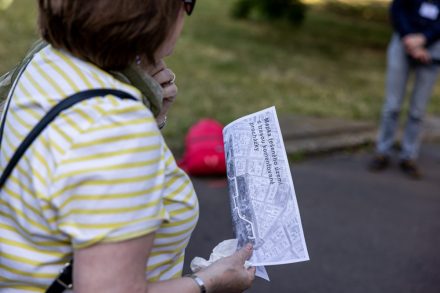 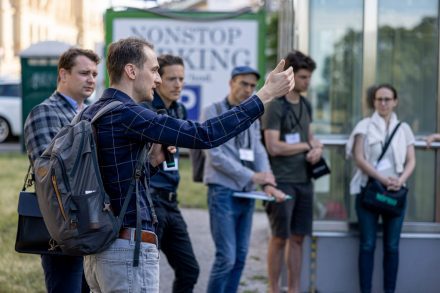 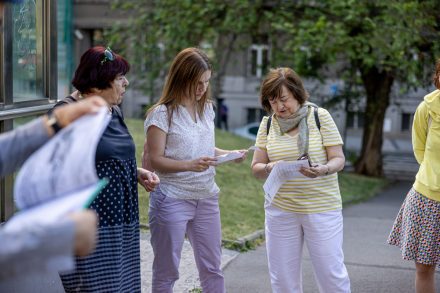 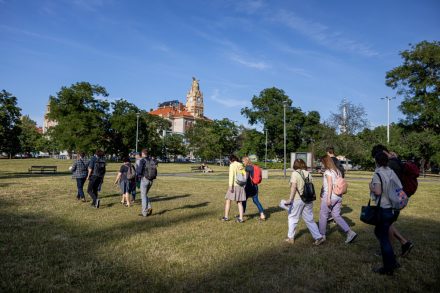 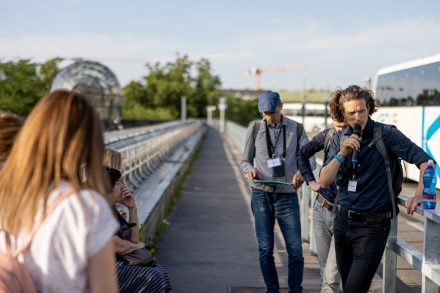 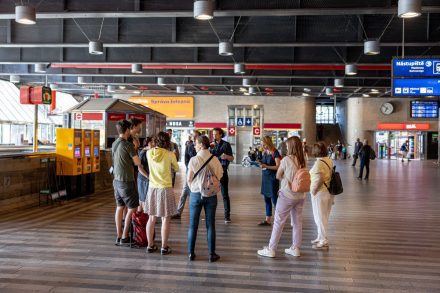